We are investing £380,000 laying a new water main in Leeds which will keep the community’s taps flowing into the future as the community grows.

The new 500 metre long pipeline will main to support the existing pipeline by enabling us to pump more top quality drinking water into the area, maintaining water supplies and pressure following development within the area.

This work forms part of a two-phase scheme, with the first phase in Upper Street and Burberry Lane, beginning on 4 July. We expect this first phase of the project to take approximately nine weeks to complete.

Phase two will take place next year, when the existing network will be replaced following frequent recurrent leaks. Information about this work will be available nearer the time.

In order to minimise disruption, the majority of our work for Phase one will take place in private land. However, with the need to cross Burberry Lane and connect into the existing network in Upper Street, these roads will need to be temporarily closed.

As a safety precaution for pedestrians, motorists and our team, we will need to close:

Burberry Lane between 13 and 22 July

Upper Street between 23 and 31 July

Why the need for a road closure?

The safety of the public and our construction team is our top priority. When planning the project we reviewed using temporary traffic lights or contraflow within our construction area, however due to the width or the roads and the location of the pipeline crossing there will not be enough safe passing space for vehicles, or a safe working space for our teams on site.

When closing roads we are required to provide a diversion route that is along roads of the same class or higher.

We are aware that the diversion may result in some road users finding alternative, shorter routes. We recommend road users following our diversion to ensure they do not use unsuitable roads for their vehicles.

Regular updates are being placed on our website: http://www.southeastwater.co.uk/leeds 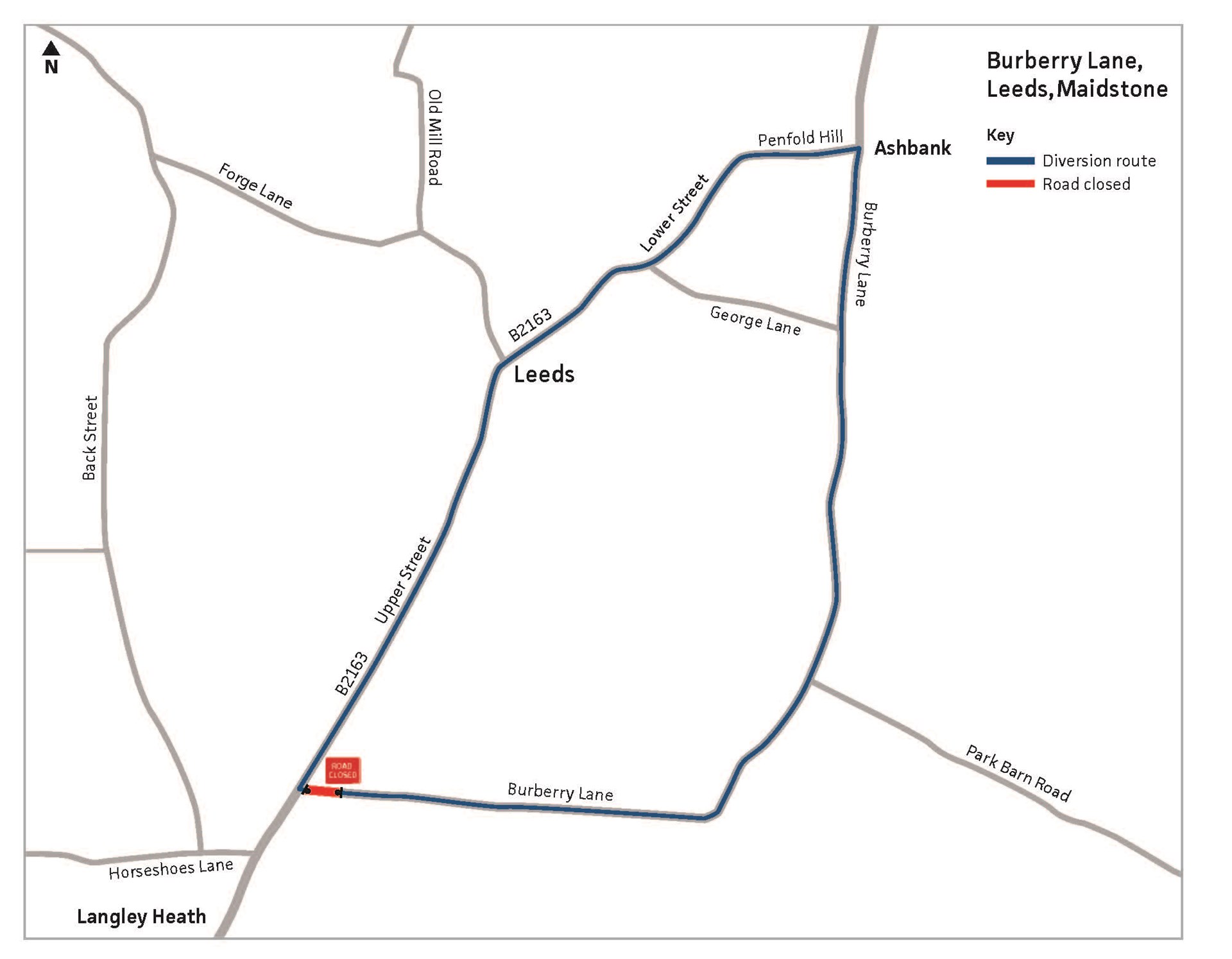 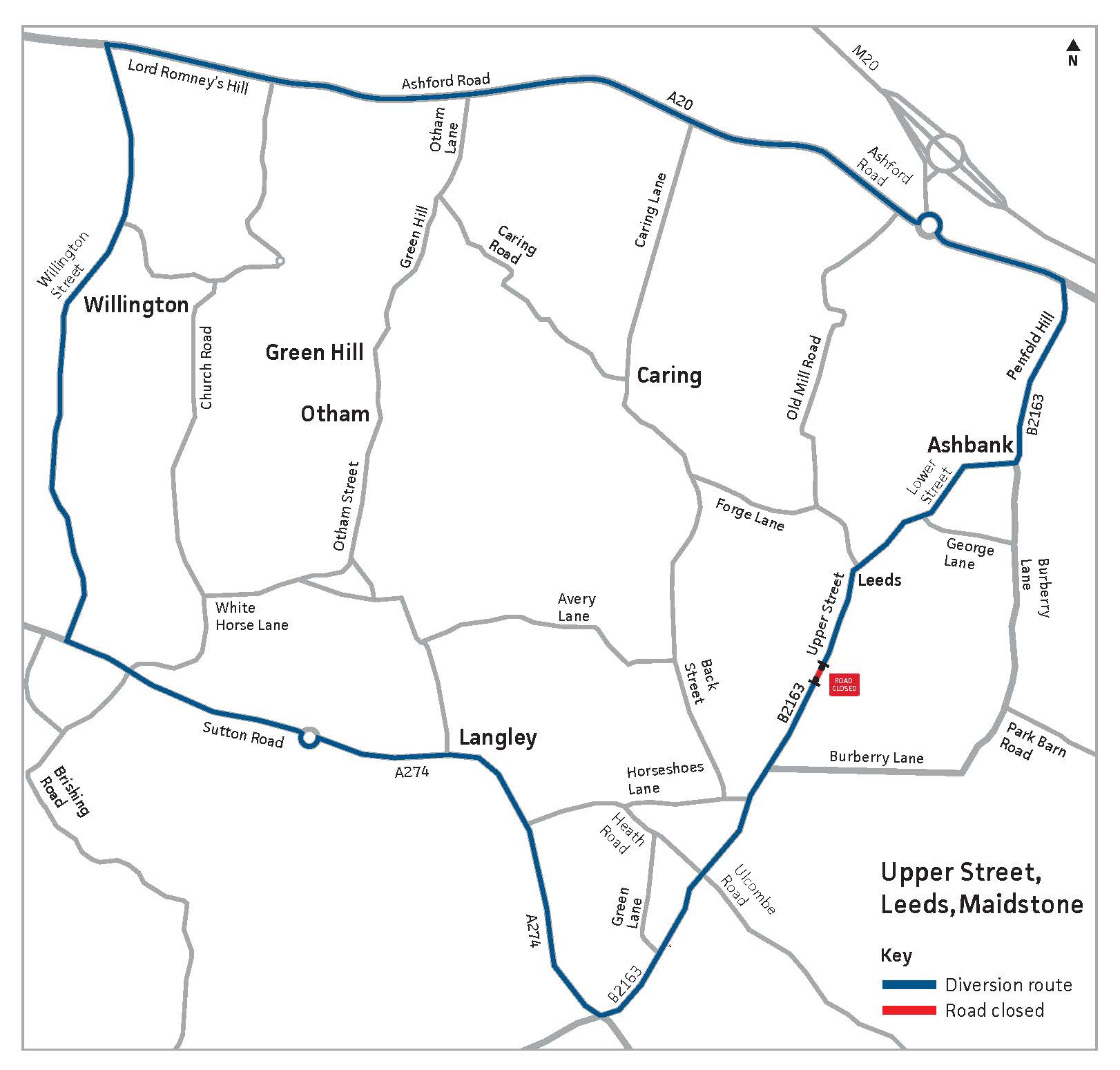 Leeds village in Kent cannot, of course, be compared with Leeds in Yorkshire which is probably the first 'hit' you get when searching for Leeds on the web.  We are a small community with fewer than 1000 inhabitants, nestling at the foot of the North Downs in the heart of the Kent countryside five miles south east of Maidstone.

The village may have taken its name from the stream known in early times was known as the Hlyde…… the loud or noisy one. We know the original settlement was called Hlydes – 'belonging to the noisy one' and is recorded as Esleades, 1086, Hlydea, Hledes c.1100 and Leeds 1610.

Sadly, the noisy one has now been muffled by being diverted through an underground conduit – the sound of merry water being replaced by the rumble of traffic.

If this is the true origin of the name, it would pinpoint the location of the original settlement as being in the hollow where now stands the George Inn and the cluster of delightful period homes.

Of course, much of Leeds fame is due to its proximity to Leeds Castle. Nowadays a Mecca for tourists but up to 1974 it was privately owned, keeping many people in Leeds and nearby Broomfield employed both in the castle and on the surrounding farmland.

There was an Anglo-Saxon fortress on the site of Leeds castle as early as 978 AD and, as you would expect, has had a colourful history through the ages with much of the British monarchy passing through its portals.  Now many thousands of people from all over the world are attracted to its moated magnificence, to the beauty of its surroundings and to attend the many concerts - classical, jazz and pop – held in the grounds throughout the summer.

As you come into the village from the busy A20 you are aware of another landmark – our ancient Norman church its suggestions of earlier Anglo-Saxon origins. It is a beautiful building with its surrounding churchyard which in spring time displays a marvellous carpet of snowdrops and later daffodils – worth a journey in itself.  Do take time to walk round the graveyard and read some of the ancient gravestones which give us fascinating glimpses of social history through the years.

In the middle of the village, behind the George Inn on the rise of land and set back from the road is the site of the old Leeds Priory.  We understand that it was founded in 1119.  The Priory flourished for 420 years until King Henry VIII with his relish for purging the land of Papal error and replenishing the royal coffers at the same time, ordered its dissolution.  Not surprisingly, the site is reputed to be haunted.

Around the turn of the century a retired policeman recounted seeing a ghost that changed into four different figures before vanishing in broad daylight. Opposite the Church is the Leeds and Broomfield Church of England Primary School – opened in 1874.  Today, it is still thriving.