A Brief History Of the Branch

The original Branch was formed as the Leeds and Broomfield Branch in 1933.  In the early 1950’s Hollingbourne Branch folded up and the few members joined the Leeds branch.

In February 1989 Bearsted & Thurnham Branch folded up and the few members joined the Leeds and Hollingbourne Branch and it was renamed as The Leeds Hollingbourne & District Branch.  We now cover the large area of Leeds, Broomfield, Hollingbourne, Bearsted & Thurnham.  We have 63 members at the present time and we welcome new members who do not have to be ex-service.  We raise money for recognised Legion charities, normally about £1000 per year on top of the Poppy Appeal where we collected about £12,000 in 2006.

We organise the Poppy Appeal every year for this large area.  We have 3 organisers and numerous collectors and are, every year looking for more collectors to replace the ageing collectors.  Please contact Mrs Jeanne Davidson 01622 880650 for Hollingbourne, Mrs Mary Henderson 01622 880625 for Bearsted and Mrs Shirley Thurgood 01622 761711 for Leeds and Broomfield, if you feel you could give a few hours to help every Poppy Time, which is in October/November.

Branch meetings are held on the first Tuesday in the month at 8pm as follows:

March, May, July, November and December in Hollingbourne Village Hall

We have a trained welfare worker who can give help and advice to ex-service personnel and their families and dependents.  Please contact Mr Frank Burniston 01622 880402 if you need help.

FUNDRAISING - All the year round the Legion Benevolent Fund and the Poppy Appeal benefit from legacies and a huge variety of sponsored events and fundraising functions. But the peak of our fundraising comes in the run-up to the Legion’s Festival of Remembrance Sunday, when the nation proudly remembers those who died that we might live. In early November some 30,000 Legion volunteers take to the streets with poppies and collecting boxes, raising millions of pounds for the Poppy Appeal thus funding our benevolent work. You can be one of them.

HOW WE SPEND THE MONEY - 92p out of every £1 donated to the Legion directly benefits those in need: 40p through welfare schemes; 24p on providing work; 28p on benevolent services.

For more information and to join the Leeds Hollingbourne & District Branch, contact:
Norman Dabbs on 01622 880482

For more information about the Royal British Legion, visit their website:
www.britishlegion.org.uk

PROVIDING WORK - The Legion’s Training Company, with the National Training College at Tidworth and Career Advice Centre on Merseyside, has been established to meet the needs of those leaving or who have left the armed services for retraining, qualifications and placement in jobs. Capacity is 4,000 people per year. The Legion Small Business Advisory Service and Loan Scheme advises those leaving the services who wish to set up their own business, and provides interest-free loans where appropriate. The RBL Attendants Company employs more than 1,600 people as security guards and car park attendants throughout the country. Taxi Drivers Training Scheme Grants are made to provide training. A specialist taxi driving company has been appointed as a Royal British Legion accredited training provider for the taxi driver training scheme.

WORK FOR THE DISABLED - The Legion is the largest employer of disabled people in the country. The Legion Poppy Factory employs 100 with a further 80 working self-employed from home. Between them they produce each year 35 million poppies, 400,000 remembrance crosses and 90,000 wreaths. The RBL Industries employs nearly 300 people on printing, production of road signs and industrial pallets. It also places disabled workers in sheltered industrial groups.

BENEVOLENT SERVICE - The Legion’s seven residential homes care for 450 ex-servicemen and women who are no longer able to care for themselves. The Legion’s three Convalescent Homes help 4,200 people each year to recover from illness, giving them the strength to carry on. The Legion’s Pension Department gives free expert advice to identify and justify claims for War Pensions and Widows Pensions to some 50,000 claimants per year, of which 10,000 are new cases. Around 3,500 cases a year are taken to tribunals on behalf of clients.

HOUSING - The RBL Housing Association now completely independent and operating as ‘Housing 21’ has provided modern homes for more than 20,000 people.

PILGRIMAGES - The Legion Pilgrimages department administers the Grant-in-Aid scheme which helps widows on a first visit to the grave of their husband, wherever it may be. Graves as far apart as Egypt, the Far East, France and the France have been visited. Veterans, families and historians have all enjoyed the atmosphere and expertise of Legion pilgrimages.

Young people of ex-service families are sponsored by the Legion while undergoing character building activities in the community. The Legion also supports the United World Colleges through the Earl Mountbatten scholarship, and many other youth activities. The Legion is affiliated to the British Youth Band Association. The Duke of Edinburgh’s Award Scheme and the National Youth Association. 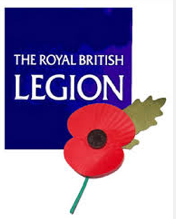